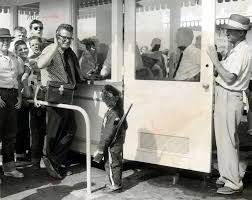 It was July 18th 1955. Dave MacPherson was a 22 year old Scotsman and student at Long Beach State College. The day before, he was watching ABC when he heard the invitation to the general public to come and experience Disneyland. Dave immediately decided he was going to be the first person in line.

He drove the 10 miles to Anaheim on his motorbike and started the line at 2 am. “I decided I wanted to be the first in line. The first person to go into the park who wasn’t a relative of Walt’s or some celebrity. The first regular guy to go in the front door,” Dave said.

Dave only paid $1 for his admission ticket. “Back then folks would pay for admission and then buy books of tickets for various attractions.” As the first customer, Dave received a complimentary card to use on the attractions, but he never got the chance to use it as he had to get back to school. He was unable to ride a single attraction that day.

The Scotsman was excited to learn later, that he was to receive a lifetime pass for being the first ‘regular guy’ ever to enter the park and has been enjoying the perks annually since. His lifetime pass comes in installments every year.

”Each January I eagerly await the arrival of the next installment of the pass which is then good for another year at any Disney park, and I have received these annual passes since 1955. At the beginning it was just a paper or cardboard pass and for years it was silver. In recent years it has been red in color and is made like a credit card and says on the front “VIP MAIN ENTRANCE PASS”. The reverse side has my name and says: Admit Passholder and 3 Guests.”

The pass was originally only for Disneyland but has since been extended to any Disney park in the world.

In his later years, he’d take his wife Wanda and his good friends Martha and Joe Ortiz. He carries photocopies of a page in his scrapbook containing “first-day” news clippings from papers in LA and Long Beach proving that he indeed bought the first ticket, as he’s since lost his admission ticket from that Magical July day.

“It isn’t unusual after I give a copy of that scrapbook page to anyone manning the entrance gate, to have that official shout to the crowd, “Folks, this man bought the first ticket to Disneyland when it opened in 1955.” He goes on to say that after that announcement he almost always gets approached by people from all over the world who ask for his autograph or for a picture of him and his wife Wanda.

It’s hard to imagine what it was like there on that magical day when Disneyland was opened to the general public for the very first time. Disneyland is the only theme park designed and built to completion under the direct supervision of Walt Disney. A one day ticket in 1955 was only $1 for adults and 50 cents for children.

Each of the park’s attractions had a fee. Many cost around 25 to 35 cents for adults and 10 to 25 cents for kids. If you decided to try everything it could cost you around $8.70 for yourself and $5.15 for each child. In comparison, one day passes today are $99 for those above age 10, with an additional $40 fee to experience both parks that make up Disneyland.

Some of the rides and attractions available on opening day included: 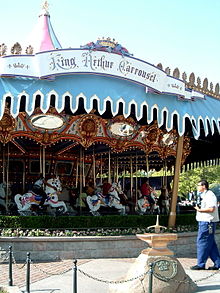 I don’t know about you, but I’m definitely a little jealous of the Scotsman who was first in line that day and gets to enjoy Disney park magic whenever he wants!

Kirk Douglas Has Passed At 103

DisneyScoop.com is your one stop unofficial source for all things Disney!
Contact us: [email protected]